How Much Is Hope Worth?


A discussion has been ongoing about the elements of value that could be considered in addition to the cost-effectiveness and budget impact of a novel therapy when determining how much value it represents.1 Among several other possible value elements, the value of hope was discussed, defined as the patients’ attitude to risk: some patients may value a treatment that provides a chance for long-term survival (contributing to a larger variability in outcomes), hoping that they will be the ones who can get to live longer, while other patients may prefer treatments with less variability around expected outcomes. Measurement of the value of hope is notoriously difficult, and the few studies2-4 that attempted it previously did not fully separate the value of an increased life expectancy, as a result of an increased chance of survival beyond a certain number of years, from the value of optimism that the person assessing the value will be among the lucky ones. That might have lead to double-counting and an overestimate of the value of hope.

The authors of the current paper set out to estimate the monetary value of hope by evaluating cancer therapies that offered the hope of 5%, 10%, and 20% chances of 10-year survival while controlling for the expected overall survival, and taking into account the ability to pay and preference heterogeneity.

A discrete choice experiment (DCE) was designed with the hypothetical situation similar to the studies before: participants were asked to suppose that “they had recently been diagnosed with cancer that had begun to spread.” They then had to consider their choices between the case when expected survival was constrained to 3 years, with a given chance of 10-year survival, or a case with certain 3-year survival outcome (ie, 10-year survival was zero); additional questions related to health status and out-of-pocket costs. The survey went through several rounds of refinements regarding the questions, response levels, and the way of presenting choices. Statistical analyses were designed to elicit the value of hope by obtaining the value that participants assign to uncertain survival outcomes and estimating the dollar value. 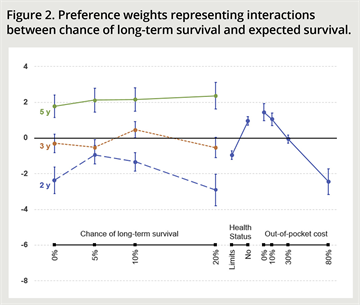 After piloting among the general population, patients from the cancer support community with a history of cancer were invited to complete the online DCE survey in the summer of 2019. Overall, 200 participants, mostly White, 75% female, with average age of 43, and coming from a broad range of backgrounds in terms of education and income level, completed the survey. In the main statistical model, the estimated value of hope for a 5% chance of survival was on average about $6000 and $12,500 for a 10% chance. The average monetary value for a 20% chance of long-term survival, however, was negative, relative to the certain value of expected survival. (The preference weights, including the interaction of long-term survival and expected survival are shown in the Figure [Figure 2 of the original paper].)

With a longish life expectancy of 5 years, when a 20% chance of 10-year survival corresponds to 80% of an average 3.8 years, participants’ choices were consistent with expectations according to utility theory and risk neutrality. However, when the choice involved the scenario with a life expectancy of 2 years, where a 20% chance of 10-year survival implies an 80% chance of a 1-month survival, participants rarely opted for that.

Although the overall results have face value, the authors highlighted a rather large heterogeneity in patient preferences across attributes. A latent-class analysis, designed to identify groups with similar preferences, found 4 groups of participants differing in terms of their sensitivity to costs and preferences for therapies enabling greater long-term survival for a few, with some starkly opposing views: a specific group exhibited increasingly negative preferences for higher chances of long-term survivorship.

The results of this study contribute very important insights into the value of hope. The authors found evidence that the value of hope could be an important element, but it cannot be considered independent of expected survival and there are some important differences in valuation across individuals. Limitations that DCE studies are subject to a relatively small sample size and some concerns about incentives to reveal true preferences hold; however, this very carefully designed and executed study has shown that there are no easy responses to how much hope is worth. Health policy decision makers should take note of the very diverse patterns of preferences and consider these carefully for resource allocation and reimbursement decisions. 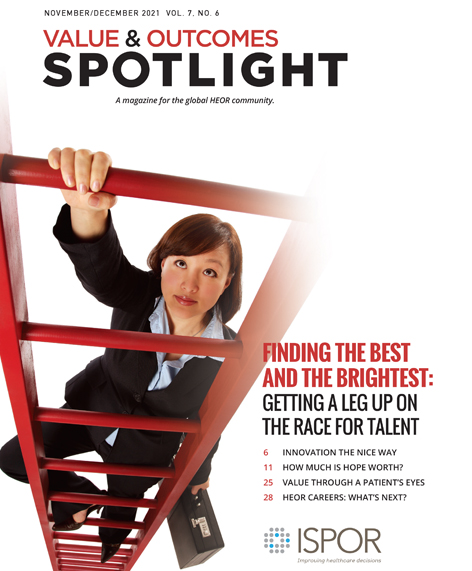