The COVID-19 Virus in Wuhan, China: A Personal Story 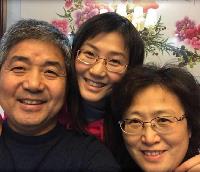 My mother has been hospitalized for 6 weeks with the COVID-19 virus. She lives in the epicenter of the outbreak in Wuhan, China. Since the outbreak of the epidemic, I have been closely following the news and the science. I have heard many frontline stories from my family and friends back in Wuhan. It has been an emotional rollercoaster ride for me, being a direct family member of a patient with the coronavirus. So, here is my story:

"My mother has been hospitalized for 6 weeks with the COVID-19 virus. She lives in the epicenter of the outbreak in Wuhan, China."

I grew up in Wuhan, China, which has, and will always have, a special place in my heart. It is where I spent the first 22 years of my life. Wuhan is where most of my family, relatives, and friends are. Wuhan is my home. Wuhan is my root. Wuhan may not be a well-known Chinese mega-city like Beijing or Shanghai, but it is a large metropolitan area with a population of 11 million. Wuhan is one of China’s transportation hubs and is the financial, cultural, and educational center of central China. Since January 2020, Wuhan has been known, unfortunately, for another thing: the coronavirus.

It was the middle of December 2019 when I first read on a Chinese social media platform about a respiratory disease going around in Wuhan. At that time, the disease was simply classified as a “pneumonia of an unknown cause.” I glanced through the article quickly and did not really pay much attention, as my years of PhD training in science have taught me not to trust such anecdotal stories easily. Two weeks later, the Chinese government, for the first time, confirmed the spread of the disease. Scientists identified the cause as a novel coronavirus. The official message was that there was no evidence of human-to-human transmission and the government had the situation under control, thus there should not be any reason to worry the general public.

"It was the middle of December 2019 when I first read on a Chinese social media platform about a respiratory disease going around in Wuhan."

This was reassuring to us because my family lives far away from the seafood market that was believed to be the source of the virus and they have always lived a healthy lifestyle. There should have been little chance of my family getting infected. My parents got on with their normal life; they had a few family gatherings and started to prepare for their upcoming trip to the United States to celebrate the Chinese New Year with my son, my husband, and me here in San Francisco.

A month later, on January 14, 2020, we heard something concerning. A well-respected Chinese epidemiologist spoke at a national news briefing, confirming that the virus was being transmitted through human contact. In addition, there were already a number of cases of medical personnel becoming infected after caring for sick patients. Since then, we started to hear more and more heartbreaking stories—entire 3 generations of families getting infected and people dying in their homes because of the shortage of medical resources. My parents decided to cancel their US trip altogether given the growing severity of the situation.

A week later, on January 23, the central government locked down Wuhan. The local government suspended all forms of public transportation and banned all private transportation on the roads (except for emergencies). A city of 11 million turned into a ghost town almost overnight. Roads notorious for their traffic were empty. Shops across the city were closed. Only 2 types of business were allowed to remain open: pharmacies and supermarkets. Schools were postponed indefinitely. People were required to stay at home and order their food and daily groceries via community-based group purchases. In my parents’ precinct, authorities even stopped the elevators in our 30-story apartment building to prevent people from going outside.

"A city of 11 million turned into a ghost town almost overnight."

It was also on this fateful day that my mother started showing symptoms. She started having mild, transient fevers. Within a few days, her condition deteriorated drastically. She experienced high fevers (>105° F) that did not subside despite medication. In addition, she had difficulty breathing.

My father had to take her to the hospital. They chose to go to a hospital in the suburban area and left at 4:00 AM to try to avoid the peak hours of the hospital and minimize the risk of cross-infection. Based on my parents’ recount, they were not prepared for what they saw: The hospital outpatient center was packed with hundreds of patients with fevers and coughs. The only way to get around was to push their way through the angry and anxious patients and their families.

After hours of waiting, my mother finally got a blood test and a computed tomography (CT) scan. Her CT images showed “ground glass” opacity in both lungs, a characteristic clinical marker of the coronavirus infection. My mother was immediately put on broad antiviral and fever-reducer infusion to try to alleviate her symptoms.

The following 4 days were the most challenging time for my family and me. My parents had to go to the hospital every day for the next 4 days for more infusions, but my mother kept getting weaker. Despite being clearly symptomatic, she could not get tested for the virus due to the shortage of test kits. In my opinion, this was one of the biggest failures in the system in the early days, because without a positive test result, she could not get hospitalized. What is perhaps more worrying is that my father did not have proper protective gear and was exposed to the dangerous environment every single day during her treatment. I felt scared and helpless for not being physically there for them.

I knew I could not just sit around and do nothing. I decided that while they were fighting for their lives on the frontlines, I would arm myself to the teeth with news and knowledge of the disease in order to be prepared to support my parents in any possible way. I read up on the virus and any related ongoing research. I learned that there were a number of drugs in clinical trials that might work for this disease. One of the most promising drugs is remdesivir from Gilead. I reached out to the physician lead of the trial, hoping to get my mother recruited (I never heard back). I even contacted Gilead for compassionate use but learned that it was not feasible due to multiple regulatory issues. I reached out to nearly all of my contacts in China to see if they could help my family and to see if there was any chance to escalate my mother’s case so she could get hospitalized as soon as possible.

"I decided that while they were fighting for their lives on the frontlines, I would arm myself to the teeth with news and knowledge of the disease in order to be prepared to support my parents in any possible way."

Ultimately, we got lucky. On the fourth day of infusion, my mother was able to get a confirmed diagnosis by the nucleic acid test. On the same night, my parents got a phone call telling them there was a hospital bed ready for her. My father had to bring her in within an hour to secure the bed before it was given to another patient.

Long story short, my mother has been hospitalized for more than 6 weeks. She received oxygen and was stabilized. Her condition has improved with the comprehensive hospital care. Her most recent tests showed that the viral load was already undetectable. However, she is still recovering from lung and heart damage inflicted by the virus and may need to stay in hospital for a while longer. My father, because of his close contact with my mother and other patients with the coronavirus, was put under strict home quarantine for 14 days. He could not even open the door to take out trash. Miraculously, despite everything he went through to get care for my mother, he has been doing well, and multiple testing for the virus showed that he did not get infected at all.

It has been almost 3 months since the virus outbreak in China. The situation in Wuhan has gotten much better. The numbers of new domestic cases and deaths have been in the single digits for 5 consecutive days. On the other hand, we are seeing the virus sweep across other countries like Italy, Spain, and the United States.

A lot of people have asked me what I think about the situation in the United States, especially after what I have been through. I told them I am worried. I am worried about the limited number of coronavirus tests available. In addition to social distancing, getting tested early to identify the infected, isolating them, and tracking whom they have been in contact with are the only ways to slow down the spread of the disease. Without enough testing capacity, doctors are hamstrung and the health of the general public is endangered.

I am also worried that a large portion of the general public is not giving enough attention to the issue or is treating it cavalierly. The Asian community in the United States generally seems to be more vigilant, but many more Americans still think of it as “just another flu.” That is not right. COVID-19 is a novel virus with still many unknowns. We do not have an effective treatment or vaccine. As a species, humans have never encountered the virus before and, therefore, have no immunity. Despite draconian measures, the virus still took a big toll on China and the Chinese people and is already putting countries like Italy and Iran in an unprecedented public health crisis.

"I am also worried that a large portion of the general public is not giving enough attention to the issue or is treating it cavalierly."

The United States could be only just weeks or even days away from an outbreak that could spin out of control. I am also worried that the US healthcare system will be overwhelmed. This is a scenario that has been played out repeatedly over the past few months: A highly contagious novel respiratory disease, if not controlled, sweeps through an unimmunized and unprotected human population, resulting in an unprecedentedly high influx of patients that strains most, if not all, medical institutions quickly. And that has led to many heartbreaking stories.

Finally, I worry that some people will use the coronavirus as another convenient excuse for racism and xenophobia against people of Asian descent. The COVID-19 virus is now a pandemic. It is global. The virus knows no borders; it does not discriminate based on nationality, ethnicity, or language. We are all in the same boat. Humanity has to unite and fight this war together as one.

Update: After 7 weeks of hospitalization, my mother finally got discharged on March 25th. She has been sent to a hotel for an additional 14-day quarantine, as mandated by the Chinese government. We are deeply grateful to all the people who have given us all forms of support and help during this difficult time. Special thank you to all the doctors and nurses around the world who had fought and are still fighting on the frontlines of the coronavirus pandemic.